Best known for her partnership with French star, Michèle Mouton, Fabrizia guided the pair to the first WRC win by a female team, at San Remo in 1981. The following year, Pons/Mouton took three wins, finishing second in the World Championship.

Partnership with Piero Longhi in the 1994 Italian Rally Championship brought wins on Il Ciocco and the famous Mille Miglia. Fabrizia’s triumphant return to competition caught the eye of Ford’s WRC team, who paired her with the great Ari Vatanen (below): a partnership that continues to this day. Ari describes working with Fabrizia as “sheer joy”: the duo later fulfilling its potential with wins in the Atlas Rally and Baja Portugal for the Citroen Rally Raid team.

From 1996 to 1998, Pons’ racing partner would be Piero Liatti, as part of the Prodrive Subaru works WRC team. A pair of podiums in 1996 were followed by victory for the two Italians on the ’97 Monte Carlo Rally, and two more podiums.

New challenges beckoned at the turn of the century, when Fabrizia turned her attention back to rally raid, and a seat alongside Jutta Kleinschmidt in the works Volkswagen Touareg. Pons stayed with Volkswagen for six years, scoring a third place with Jutta on the 2005 Paris Dakar.

Announcing the new appointment at a press conference in Kenya, yards from where the Race4Change/Tuthill Porsche 911 rally cars will take the start on November 19th, team leader Steven Funk could not contain his excitement.

“Race4Change promotes female empowerment: better lives for poor women. Fabrizia is one of the most successful women in the history of motorsport, so to have her on our team is a dream come true. Fabrizia’s achievements are an inspiration: the lady is a touchstone for all who dream of a better life. 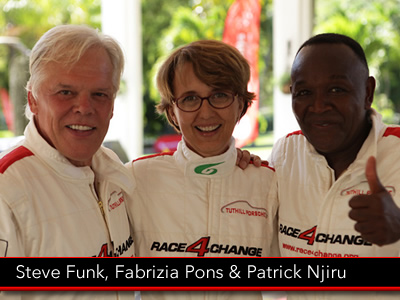 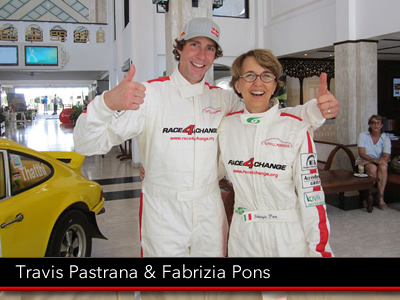