London to Cape Town Rally: In the Sand 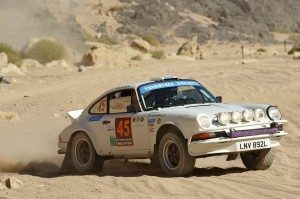 Day 9 of the London to Cape Town and the men are being firmly separated from the boys, using sand as a medium. The organisers expected a major shake up once the event left Europe and that is exactly what happened: the Tuthill Porsche is now up to 6th! Here’s the story:

Every dog has its day and today it would be a Dakar-style blast of grit, sand, lose stones, large stones that need dodging with care, ruts and smooth baked-hard clay, diving between gaps in the mountains, all the time heading for a long line of spiky shaped mountains in the far distance. 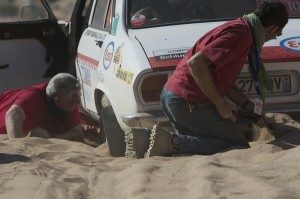 Crags with pyramids, it’s a row of mountains you get when you give a child of six a blue pencil, or open an original copy of Rider Hagard’s King Solomons Mines. Route note descriptions go something like this, “keep close to cliff on left… go right of Acacia tree… straight on past yellow rock… avoid gulley before string of black boulders… head for trees on far horizon… keep small volcano on right.”

Emerging from all this was the Belgian Porsche 911 of Joost Van Cauwenberge & Jacques Castelein who set fastest time, dropping just 8 seconds. Steve Blunt and Bob Duck in the non-turbo black Subaru Impreza was nearly two minutes behind on 2m05s, and third best was the BMW M535i enjoying a good run, nearly four minutes behind the time set by the 911. 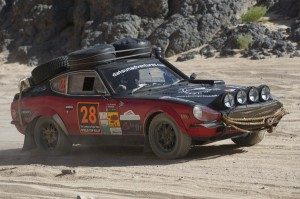 Andy Actman’s Toyota Truck was fifth, just under four minutes adrift, behind the fourth-best Rene Declercq and Francis Tuthill, who stopped to pull out the Maestro girls at one point.

Crews were at a comfortable hotel for a meal and a few hours break, at midnight they left for the port and the crossing of the Red Sea to Saudi Arabia. Another first for this event, the Kingdom of Saudi Arabia has never before ever hosted an international rally crossing its territory.

It’s the end of Day 5 on the 2012 London to Cape Town Rally. No news from Francis Tuthill in the Toyota Hi-Lux, but I can tell you he was lying in 19th position at the end of Day 4: one place behind the Porsche 964 Carrera 4 of Tomas Premosil and Lukas Kuttler.

Further towards the front, the Tuthill-built 911 of Joost von Cauwenberge and Jacques Castalein is going very well, with three World Cup stage wins and two second places in nine stages up to the end of Day 4. The final stage of day three was their only problem, when a navigational error cost them dearly, bringing them across the line in 31st position.

No results are yet available for the end of today, but the pair finished Day 4 in tenth position overall, a solid result underlining their competitiveness. Four places back is the Porsche 912 of our friends Alastair Caldwell and Hayden Burvill.

The pair have had a steady start to the rally – Alastair had barely driven 50 kilometres in the 912 before the rally preamble in Brooklands last Sunday – but he has been settling in well, scoring his best position of the event to date in yesterday’s World Cup stage: a very sweet fourth place. 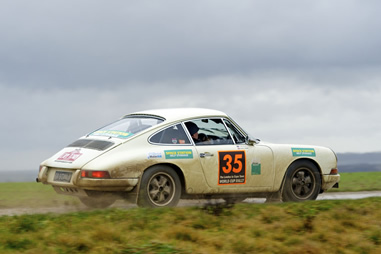 Today was the toughest day of the rally so far, with 470 kms to cover and some tricky stages in the Greek countryside. The top ten went wrong on the final stage, giving our 912 friends a helping hand up the order. Tomorrow is an incredible day, with no less than six flat out stages and a 500 km drive to the midnight ferry to Egypt. You know it’s going to bring some casualties.

Day 7 is a rest day, the only one until Nairobi in Kenya: ten days and 5,000 kilometres away. Can you believe they paid to do this event?! (pics here by Gerard Brown)

Donate to Race4Change and help change lives through your love of rallying!